Two of the best-known names in English law and order in the middle years of the last century were thrown together in a trial at Kent Assizes in 1947 of a man accused of strangling a 48-year-old spinster on the A20 near Wrotham Hill. 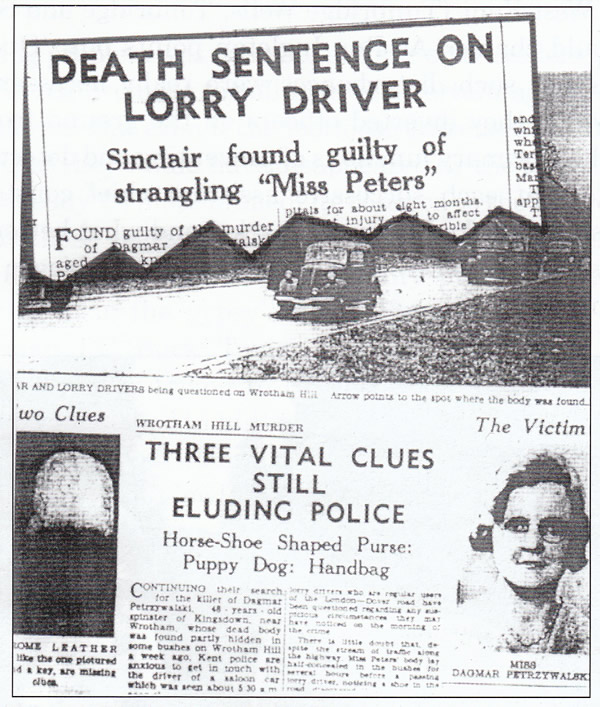 Chief Inspector Robert Fabian, who led the murder investigation, became famous in the 1950s as Fabian of the Yard in a popular BBC TV series starring the actor Bruce Seton in some romantically sanitised cases from the detective's career.

At the end of October 1946 Dagmar Petrzywalski, known locally as Miss Peters, who lived alone in a bungalow called The Vic in Hever Avenue, part of the Hever Estate in West Kingsdown, and who had been employed by the Post Office as a telegraphist, left home to try to hitch a lift via London to visit relatives in Woking; she never made it. Her body was found behind bushes by a passing lorry driver near the Devil's Kitchen on the A20.

There was no sign of a struggle, and as the Kent Messenger reported: 'No outrage had been committed, and she was still a virgin.'

Murder Squad detectives, under Fabian, were anxious to find three missing possible clues: an extremely small terrier puppy Miss Peters had apparently bought the previous day in Maidstone Market and which she may have been carrying in a yellow crocheted handbag made by her sister in law; a brown horseshoe-shaped purse of chrome leather; and a Yale key.

The movements of hundreds of people, mainly lorry drivers, were checked to no avail. Eventually the sister in law was asked to make another string bag like the one that was missing. When a photograph of it was circulated to newspapers, a young lad came forward- he had found the victim's bag in a lake near the cider factory in East Malling. This led to the discovery that a 45-year-old named Sidney Sinclair, one of the lorry drivers who had already been interviewed, was the only one known to have been both in the vicinity of the cider factory and having travelled by way of Wrotham Hill. Confronted with the evidence, he admitted to having met Miss Peters, but claimed she died during a struggle after she tried to steal his wallet.

At his trial he was defended by Melford Stevenson, a King's Counsel. Notwithstanding medical evidence that Sinclair, from Little Abingdon, Cambridgeshire, had suffered from blackouts and head­ aches, and a declaration from his wife Daisy Emily Sinclair that 'he's been one of the best husbands,' the jury took little more than half an hour to find him guilty on March 7 1947.

He was sentenced to death by Mr Justice Byrne, who had only recently been made a judge, and whose first capital sentence this was. From Wandsworth jail records of hangings at this time, the name of Sidney Sinclair does not appear. It is possible he was reprieved.

Melford Stevenson subsequently had no better luck in his most famous case when he defended Ruth Ellis, who had shot her lover. He lost that one too, and in 1955 she be came the last woman to hang in England. Stevenson went on to become a judge with a reputation for severity; in 1969 he handed down the longest jail sentence in English legal history when he gave the Kray twins 30 years.